William Penn and the Quaker Legacy

William Penn ruled Pennsylvania but was not tempted by coercion or violence.

Had William Penn founded the colony of Pennsylvania on his Christian principles despite the ungovernable settlers who followed or preceded him there? Even if Penn had hoped to make a profit from this vast land grant, conferred by Charles II to offset loans taken from Penn’s father, the younger Penn fought consistently for ethnic and religious coexistence there and in England, going to a debtor’s prison in 1708 while “ingrates” in Pennsylvania refused to fully pay their debts or annual “quitrents.”

In William Penn and the Quaker Legacy, John A. Moretta rejects hagiography for holistic biography. Such balance is evident in the relative importance Moretta gives to the Old and New Worlds in having shaped Penn’s ideology, his decisions and his contribution. The one imbalance might be an inadequate attention to the non-Quakers who were influential in every faction (merchants, yeomen, artisans, British officials) and others who had preceded William Penn’s arrival in Pennsylvania. 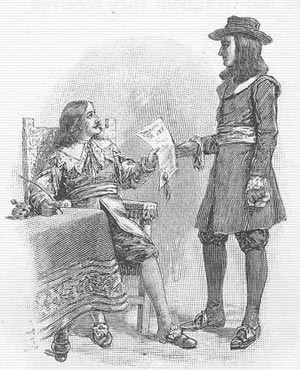 William Penn Receives the Grant of Pennsylvania from Charles II

This highly readable book emphasizes that William Penn spent four of his remaining 36 years in Pennsylvania (founded when he was 35 in 1681). They were further sandwiched by a fifteen-year absence when Quaker responsibilities and boundary disputes took Penn to England. Can Penn still be considered an American? He had chosen the name “Sylvania” consonant with creating a colony of yeomen farmers and merchants, but the Stuart King Charles II insisted on adding the prefix “Penn.” The honor was intended for Penn’s father: war hero, privateer, loyal Navy Admiral and finally “Sir” William Penn. But the son worried that his Quaker modesty would be called into question. He acquiesced after his preferences (including “New Wales”) were rejected, for Penn was a man who chose his battles carefully.

Moretta’s discussions of Penn’s bequest of religious toleration, representative democracy, equality between the sexes and coexistence among ethnic groups are detailed and persuasive. The fourth revision to Penn’s 1681 Constitution remained in effect from 1701-1776; his policy of respect toward Native Americans saved his colony from the more common history of massacres and frontier bloodshed, at least until the decade after Penn’s death in 1718. Penn anticipated the World Court and League of Nations, the Union of the American colonies, and critical parts of the United States Constitution a century ahead of others. Yet Penn may have been the most aristocratic of the Founders, and a royal courtier. He had been able to soften Puritan-dictator Oliver Cromwell and Catholic James II’s attitudes toward the dissenting Quakers, and win his Charter from Charles II within nine months when England took almost thrice as long to issue such charters. Lord Baltimore, Catholic Proprietor of Maryland, was outmaneuvered by Penn in negotiations with the Restoration rulers (Catholic brothers Charles II and James II) for control over the “Lower Counties” (now Delaware). New York and Maryland’s loss allowed a late colony vital access to trade when Pennsylvania might have been hemmed in by the older colonies.

The founder’s debts, partially the result of having poured 20,000 British Pounds into Pennsylvania and partly, that of “creative” bookkeeping by financial representative, Philip Ford, whom Penn had trusted too much, saw Penn in debtor’s prison from January to August 1708. Penn’s latter years saw him embittered toward his settlers who refused to honor rental obligations (they had agreed to begin paying “quitrents” after five years grace period, per contract). While Moretta does an excellent job of following Penn in England, Europe and in New Jersey, Delaware and Pennsylvania in this book, he is better at describing the challenges and lessons of the later period of the colony than Penn’s experiences on the ground during 1682-1684. These formative experiences may have persuaded Penn that constitutional monarchies offered checks and balances for political stability and economic growth; but Penn did not opt for coercion or punishments that the Puritans and many governments accept as necessary. It appeared easier for factions to mobilize against laws when laws were implemented by Penn’s deputies, than for these groups of individuals to offer input when asked at the start of the “Holy Experiment” in 1681-1682. Especially disappointing to Penn was the unwillingness of a majority of the 384 potential Assemblymen among established pre-1680 settlers - Dutch, Swedish and English numbering a thousand - to leave their farms for a few weeks so as to attend the first participatory people’s Assembly in Philadelphia. This book also blames the educated Quakers who refused to volunteer for government positions. Readers are asked to decide if Penn was as captive to his heritage and his proven loyalty to the Monarchy as he was by the doctrines of Quaker religion with its emphases on radical equality and democratic freedoms. (This biography appears to make a case for the former, especially as Penn did become an advisor and foreign emissary of James II instead of returning to Pennsylvania (1685-1688). Supporters who had helped Penn with his 1681 “Frame of Government” later criticized it because Penn’s power seemed “absolute.” Benjamin Furly and Algernon Sidney “felt duped and betrayed by Penn when they heard the news that the Frame of Government was the colony’s constitution.” Furly still hoped Penn would return to the drawing board to create a document fitting the Quaker track record “as ‘a noble and virtuous and trusting people…’” (Pp.109-113). In the final three chapters Moretta appears to support Penn’s decisions and strategies, including having allowed four revisions of Pennsylvania’s Constitution and opposing England’s recourse to the Vice-Admiralty courts to pursue smugglers and violators of the Navigation Acts. For all his disappointments that fellow Quakers had become avaricious when the new world allowed much to be had “free” upon emigration, he did not opt for coercion. Penn was therefore a valuable Founding Father: he respected Law as that impersonal power (equivalent to divine intervention through popular participation) to which even monarchs must submit.

Moretta effectively defends Penn but admits, “Although Penn and his wealthy Quaker brethren believed in liberty of conscience, and were certainly more tolerant in other areas than most upper-class seventeenth-century Englishmen, they nonetheless did not embrace political democracy in nineteenth, twentieth, or twenty-first century terms.” (Pp.114-121) It would be left to later Quakers to take the lead in condemning slavery for Penn dared not challenge the Crown that considered slavery legitimate and lucrative.